SCOTTSDALE, Ariz. Jan. 16, 2020 – This morning Craig Jackson, chairman and CEO of Barrett-Jackson, gave media and the public its first look at his newly restored 1967 Shelby Mustang GT500 EXP prototype known as “Little Red”. Once believed destroyed and lost forever, Little Red was discovered on March 3, 2018, in rural North Texas by a team led by Jackson and classic car restoration specialist, Jason Billups. This Shelby prototype has been one of the most sought-after and elusive vehicles in postwar history.

This morning’s unveil also featured Jackson’s 1968 Shelby GT500 prototype known as the “Green Hornet”. Today was the first time in history both experimental Shelby GT500 Mustangs have been seen together.

Little Red and Green Hornet were also joined by a one-of-one Candy Apple Green and a Rapid Red 2020 Shelby GT500, both owned by Jackson. The 2020 Mustangs are the modern day “descendants” of the two experimental 1960s Shelbys. An independent rear suspension, four-wheel disc brakes and electronic fuel injection connect Green Hornet to the 2020 models, while the new supercharger is reminiscent of what’s under the hood of Little Red. The 2020 Green Hornet car was the first model (VIN 001) to roll off the line at Flat Rock Assembly Plant last fall.

Following the presentation, the four Shelby Mustangs were started in unison by Craig Jackson in Little Red, Steve Davis in Green Hornet, Jim Owens in the Rapid Red 2020 GT500 and Aaron Shelby in the Candy Apple Green 2020 GT500. The four vehicles represented over 2,600 horsepower.

SCOTTSDALE, Ariz., Jan. 15, 2020 – Once lost, now found and restored to their original glory, a pair of historic experimental Shelby Mustangs – “Green Hornet” and “Little Red” – are being revealed together for the first time, joined by two new Shelby GT500 Mustangs at 9 a.m. MST tomorrow at the Barrett-Jackson Scottsdale auction.

Restoration of Green Hornet was led by Jason Billups of Billups Classic Cars in Colcord, Oklahoma. During the process, Jackson floated the idea of finding Little Red, which had been lost. After an extensive search spearheaded by Billups, the vehicle was discovered in a rural field in north Texas.

Finally, with Green Hornet and Little Red restored, Jackson set out to celebrate their significance by adding a one-of-one Candy Apple Green and a Rapid Red 2020 Shelby GT500 to his collection. An independent rear suspension, four-wheel disc brakes and electronic fuel injection connect Green Hornet to the 2020 models, while the new supercharger is reminiscent of what’s under the hood of Little Red.

The 2020 Green Hornet car was the first model to roll off the line at Flat Rock Assembly Plant last fall. Jackson paid $1.1 million at auction for the car to raise money for Juvenile Diabetes Research Foundation.

SCOTTSDALE, Ariz. JAN. 08, 2019 – Ford Motor Company recently presented Carolyn and Craig Jackson, chairman and CEO of Barrett-Jackson, with the first production 2020 Mustang Shelby GT500, which rolled off the lines at Flat Rock Assembly Plant in Detroit, Michigan . The Jacksons purchased the VIN 001 GT500 during the 2019 Barrett-Jackson Scottsdale Auction, raising $1.1 million for JDRF. This remarkable Ford Mustang will join other rare Shelby vehicles including the 1968 GT500 prototype known as “Green Hornet” and its predecessor, the 1967 Shelby Mustang prototype known “Little Red,” for an exclusive display at the 2020 Scottsdale Auction.

“This first production 2020 Mustang Shelby GT500 is a significant piece of American performance history,” said Craig Jackson. “The independent rear suspension, four-wheel disc brakes and electronic fuel injection engineered on this car were pioneered by Carroll Shelby over 50 years ago. He tested and developed these same experimental components on his 1968 EXP500 prototype, Green Hornet, but they were not standard in a GT500 until 2020. It’s an incredible honor for Carolyn and me to be entrusted with these important vehicles and to have supported efforts to find a cure for juvenile diabetes.”

As the winning bidder, Jackson was afforded the opportunity to match the exterior paint of his 2020 Mustang Shelby GT500 with the Green Hornet’s Candy Apple Green metallic color. Both experimental Shelby Mustangs, Little Red and Green Hornet, will be displayed at the Scottsdale Auction in January as well as in an upcoming documentary film being produced by Jackson. The film, which will be released in 2020, chronicles the stories behind the search, discovery, research and restoration efforts with a team of experts over the last decade for both Shelbys.

“Carroll Shelby’s racing technology and innovations, like those found on Little Red and Green Hornet, were far ahead of their time,” said Steve Davis, president of Barrett-Jackson. “These two incredibly unique vehicles led the way for some of the most important advancements in American performance and racing. The visionaries behind these advancements, like Carroll Shelby, not only impacted the cars of their generation, but have significantly influenced today’s performance vehicles.” 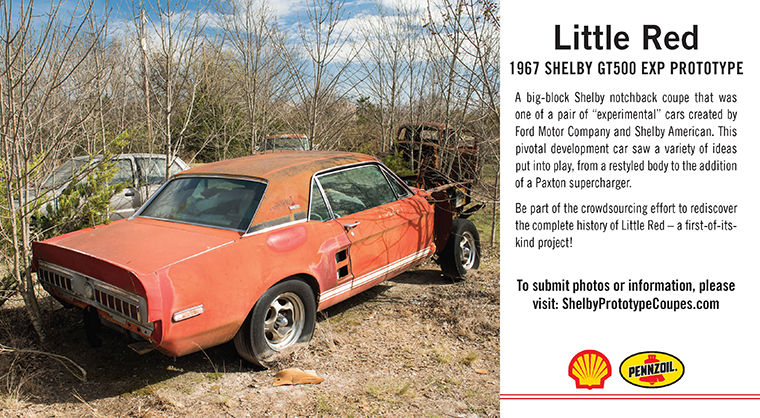 DEARBORN, Mich., – August 17, 2018 – Craig Jackson, chairman and CEO of Barrett-Jackson Collector Car Auction Company, Shell and Pennzoil today announced during the annual Woodward Dream Cruise in Michigan that Shelby American’s 1967 Shelby GT500 EXP prototype nicknamed Little Red was located and verified on March 3, 2018. The team who discovered Little Red was led by Jackson and classic car restoration specialist Jason Billups, and consisted of leading experts who located the vehicle in rural North Texas, where it has been stored by the same owner for more than two decades. The discovery of Little Red, which was largely presumed destroyed after years of searching, is considered one of the most significant finds in American car collector history.

“Finding Little Red is the discovery of a lifetime,” said Jackson. “This Shelby prototype has been one of the most sought-after and elusive vehicles in postwar history. Countless enthusiasts and experts have searched for Little Red since it went missing in the 1960s. Many believed it was destroyed when the car was no longer needed. I’m excited to announce that was not the case. We’ve found Little Red and we intend to meticulously restore this legendary car back to its original glory.”

Dubbed “Little Red,” the big-block Shelby notchback coupe was one of a pair of “experimental” cars created by Ford Motor Company and Shelby American. It was a pivotal developmental car with a variety of ideas put into play, from a restyled body to adding a Paxton supercharger to the big-block engine. Under the direction of Lee Iacocca, the car eventually became the model for Ford’s popular 1968 Mustang California Special before it was moved to storage and presumably lost.

The idea to look for Little Red began during the restoration of the other legendary Shelby prototype coupe, named the Green Hornet. Little Red and the Green Hornet were the only notchback coupes ever produced to wear the Shelby nameplate. Craig Jackson and Billups discussed what the chances might be of finding the fabled 1967 Shelby Experimental Coupe. Billups felt it was a mystery worth investigating, and the team began their search.

“Locating Little Red was tantamount to finding the proverbial needle in a haystack,” said Billups. “After our initial research we realized that, like others before us, we were using the wrong search criteria. Everyone looked for Little Red using the Shelby serial number, which would eventually lead to a dead end. We took a different approach and located the car’s original Ford VIN number, which wasn’t easily discoverable. That VIN led us to its original registration and eventually to its last owner.”

After initial contact with the owner via social media in February, Billups and Little Red’s owner agreed to meet in Dallas, Texas. On March 3, 2018, Billups, along with automotive journalist Al Rogers and Ford Mustang and Shelby specialist Todd Hollar, were given access to the Texas property where Little Red spent the last 20 years.

When the team discovered the vehicle in March, it was identified as the original missing experimental car with the assistance of renowned Ford Mustang expert Kevin Marti. The team also verified its authenticity using cross references, serial numbers, date codes and other confidential documents proving the vehicle was, in fact, the missing Shelby prototype, Little Red.

“March 3rd will be forever etched in the history books,” said Rogers. “Walking up to Little Red was like being on hallowed ground. This car was long thought by the experts to be forever lost to history. Even the owner was not aware that his vehicle was Shelby American’s iconic 1967 Shelby Experimental Coupe. We can’t be more excited to have been a part of Craig Jackson’s team and have the chance to bring this important car back to its original glory. We’re especially honored to be a part of Little Red’s restoration over the next several months, which will be carefully documented and shared with Shelby, Mustang and Ford enthusiasts around the world.”

Little Red was stored in outdoor conditions for nearly two decades. As a result, the restoration of Little Red will be one of the most meticulous projects in American car collector history. The restoration will be fully documented on www.ShelbyPrototypeCoupes.com and include photos, videos and a robust content storyboard that will detail each step of the rebuild.

Shell and Pennzoil are helping support, in part, the documentation of Little Red’s restoration journey. “As brands that have been part of American and worldwide automotive history for more than 100 years, we understand the importance of heritage. So, with that in mind, we’re thrilled to join Craig Jackson and his team on this historic journey to return Little Red to its original glory,” said Mark Henry, brand and communications manager, Shell Lubricants. “This will be one of the greatest stories of automotive history ever told, and we look forward to having a role in making it come alive for generations to come.”

To further document Little Red’s history, the public can submit personal accounts, stories and photos that feature Little Red. This will be the first time that a collector car vehicle will be substantiated, in part, using a crowdsourcing initiative on www.ShelbyPrototypeCoupes.com. 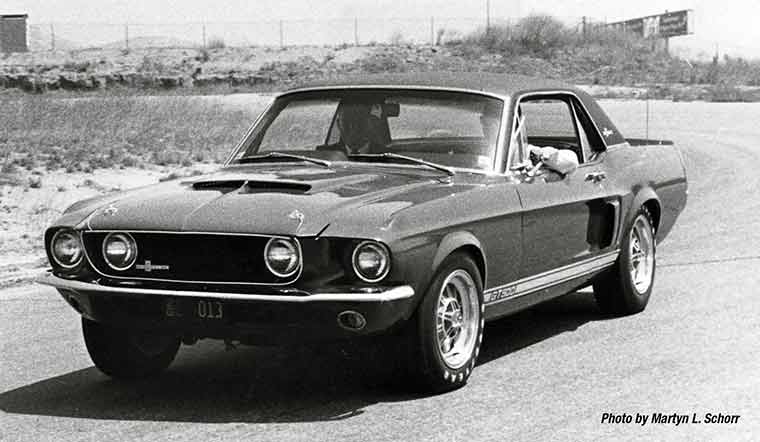 Fortunately I was at Riverside Raceway for the 1967 and 1968 model reveals and managed to get some photos and passenger seat time on the road course. I never opened the hood, but understood at the time that the 428 engine was fitted with a single four-barrel and Paxton supercharger. Most coverage indicates that its engine had two carbs and twin superchargers. Over its lifetime “Little Red” received a number of naturally aspirated and supercharged engines. It was fast, but rode considerably softer and quieter than the fastbacks we drove. It was the most luxurious Shelby Mustang I had ever seen.